All participants shot twenty-five free throws from the free throw line on the basketball court. Over 100 students participated in the contest. The six first place winners advanced to the Elks District competition on January 26th in Corona. This Hoop-Shoot contest is a National Elks contest with thousands of participants from across the nation trying to reach the finals, to be held later this year.

The six winners, from Temecula Valley Elks local contest, who are ready to compete in the next level of competition are: 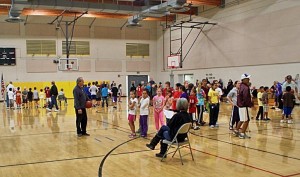