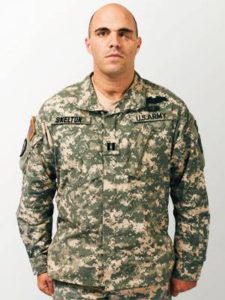 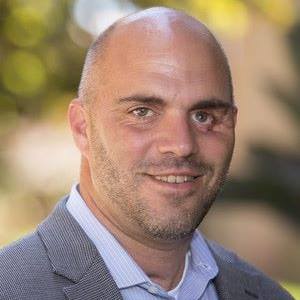 Why would the Army’s most seriously wounded commander “The Most Wounded Commander in U.S. Military History.” want to become a member of the Benevolent and Protective Order of Elk?  That’s what we asked Maj. D.j. Skelton – and here’s what he told us.

“Military families tend to move every four years or so,” he said, “and it’s hard for us to ever feel a real sense of community. I will retire at the end of June, 2018, and a couple of friends encouraged me to consider the Elks. I checked into what the Elks believe in, and knew it was right for my family.”

That’s a strong endorsement from this soldier, “The Most Wounded Commander in U.S. Military History.” 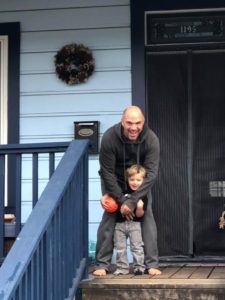 The Skelton family has decided to live in Monterey CA after his retirement…”we’re here to stay.”  D.j. is attending Naval Postgraduate School in Monterey, pursuing a Master’s in International Relations. The family includes wife Tucker Hirsch, who has just been admitted to a Master’s program at Berkeley, and their 3-year-old son, Dakota Keene Skelton.

“I plan to observe things at the Lodge for a year or so,” D.j. said, “then I hope I can really get in and be a hands-on asset to the local Elk community.”  He also has joined Rotary, and the Monterey Yacht Club… but he feels the Elks best demonstrate “hands-on Americanism.”

It’s been a painful military path to return to Monterey.  D.j. underwent 86 surgeries and six years of rehab and recovery after service in Iraq, then returned to the Infantry, deploying again as a Commander to Afghanistan in 2011.  He says the title of “The Most Wounded Commander in U.S. Military History” is a title he never wanted to earn.

The new Elk grew up in Elk Point, SD (appropriately). He briefly attended the University of South Dakota before embarking upon an unorthodox path of serving our Nation over the past two decades.  He enlisted in the United States Army in 1996 as an interrogator and is a graduate of the Defense Language Institute Foreign Language Center in Monterey.

He attended the US Military Academy at West Point, and commissioned in 2003 as a 2nd Lieutenant.  After graduating from the Infantry Officer Basic Course and the Airborne school, DJ was severely wounded while leading a rifle infantry platoon in close combat in Falluja, Iraq.

“My face was pretty much gone. For the most part, there’s no reason I should have lived through that,” U.S. Army Major DJ Skelton said during an interview with Brittany Nielsen on KSBW-TV in December, 2015.

Skelton had deployed to Iraq in November 2004 and fought in the Second Battle of Fallujah. His platoon’s first mission was simple: protect a critical overpass.

“As a platoon leader, that was it. Go defend the overpass. That’s as simple as the mission was. By the time my platoon had gotten to that intersection, it was evening,” Skelton said.

What he couldn’t see in the dark was that the enemy had dug in behind a nearby berm, and knew U.S. troops were coming. A car pulled up, two men got out, and the duo tried to blow up the overpass. Skelton gave the command to take out the threat. To do that, he and his men had to pass through an empty section of open desert.

“We got attacked, and in that firefight, I got injured. I was the first to get hit. I actually made it to one of the cement pylons underneath the bridge at the location of the enemy. I got hit through a series of rounds from weapons, AK47 rounds,” Skelton said.

A grenade hit the pylon he was leaning on, and a piece went through his leg. Shrapnel exploded through his upper jaw, through his mouth, and exited through his left eye. Besides the enemy bullet wounds he already suffered, his own ammunition began to fire from the heat of the grenade explosion. Thanks to swift thinking under heavy fire, his fellow soldiers got Skelton out of there.

“They figured out a way to evacuate me under really heavy fire, which is really impressive, and got me to a support hospital,” Skelton said.

Skelton then spent a month in a medically-induced coma at Walter Reed Medical National Military Center in Washington D.C. He woke up to his upper jaw destroyed, his left arm still attached but unusable, his knee down to his ankle now titanium, and he had traumatic brain injuries. He had so many bullet-hole wounds that doctors stopped counting them. He spent six months in the hospital.

After his recovery at Walter Reed, D.j. dedicated himself to advancing the causes of wounded vets, authoring “Our Hero Handbook,” a comprehensive guide to assist wounded service members and their families in their recovery and rehabilitation.  D.j. also served as a military advisor Deputy Secretary of Defense, Gordon, England on veterans’ affairs and care for wounded service members.

D.j. returned to Monterey CA in 2008 to command Echo Company of the 229 MI BN at Defense Language Institute Foreign Language Center. He also was the Associate Dean for DLI’s Middle East School.

He returned to the Pentagon in 2010 to serve as a Special Assistant to Admiral Mike Mullen, the Chairman of the Joint Chiefs of Staff, advising on veteran transition issues, wounded warrior policy and improved services to military families.  D.j. also served as a Non-Resident Military Fellow at the Center for New American Security, leading the “silent wounds” post-traumatic growth project for the Center.

Skelton then became a catalyst for change. He forced the Army to decide what to do with a soldier who could not physically qualify to enter battle, but who still strongly wanted to serve.

“I was one of the few who could not meet any medical retention standards to stay in, and refused to leave the Army,” Skelton said. “Even though I couldn’t physically perform some of the requirements to be a soldier – intellectually I was ok: I’d graduated from West Point, I spoke Chinese.”

His advocacy spurred programs for other wounded warriors.

“I just became one of the original wounded warriors of this generation that really challenged the way we looked at the human spirit, and what we could give back, and how we could contribute to the mission,” Skelton said.

But serving as an advocate, even at the Pentagon, is not why he had joined the military.

So, back he went to infantry training. Determined to keep a promise he’d made to his platoon on that fateful first deployment. D.j. completed the Infantry Captain’s Career course at Ft. Benning, GA, and was assigned to the 2nd Cavalry Comanche Troop, lst Squadron, 2nd CR in Panjway, Afghanistan.

“I convinced myself I could go back to combat in a way I wouldn’t jeopardize soldiers around me,” Skelton said. In 2011, he joined his previous unit halfway through a year-long deployment to Afghanistan. He ended up leading a cavalry unit.

D.j., fluent in Chinese, is one of the youngest graduates of Harvard’s Senior Executive Fellowship program and upon redeployment, D.j. was selected to serve as a China Foreign Area Officer (FAO).  He completed Command and General Staff College and spent a year in Beijing, China, conducting in-region training as Foreign Area Officer.

He also is the Co-Founder of Paradox Sports, a non-profit organization that provides inspiration, opportunities, and adaptive equipment to the disabled community, empowering their pursuit of a life of excellence and that gets wounded warriors back to their outdoor passions, like rock climbing.

“I wanted to help other wounded warriors. Helping them get back to playing in the outdoors and things that defined their happiness — that completed their life. We work, but we also need to play,” Skelton explained.

Monterey Elks Lodge #1285 says wELKome, Maj. Skelton, to the Benevolent and Protective Order of Elk.  You’re our kind of guy! 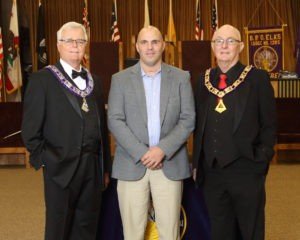