↓
Home→CHEA Districts and Lodges→California-Hawaii Elks Lodges→Mission Viejo/Saddleback Valley Lodge #2444→Santa and Mrs. Claus Delivered to Elks Lodge by the Crew of Fire Station #24
Santa and Mrs. Claus Delivered to Elks Lodge by the Crew of Fire Station #24
Santa and Mrs. Claus arrived at Mission Viejo-Saddleback Valley Elks Lodge No. 2444 in a shinny red fire truck courtesy of the crew of Battalion 7, Fire Station 24, of the Orange County Fire Authority (Capt. Mark McGrath, Engineer Guy Grindle, Firefighter/Paramedic Mike Varker and Firefighter Brian Hseith). Mr. and Mrs. Claus were attending the Elks Lodge’s annual Christmas party for Special Kids (“Guests”). To Greet the distinguished couple from the North Pole (AKA Elks Ed and Pam Mackey), two hundred and forty Guests, caregivers and Elks sang “We Wish You a Merry Christmas”.
Boys and girls, men and women of all ages filled the Elks Lodge and enjoyed a visit with Santa and Mrs. Claus. Every guest received a large holiday bag full of gifts. A hot lunch was served and a contingent of clowns from the Laguna Woods “Clown Alley” entertained. Throughout the afternoon DJs Larry and Irene Stephens provided the music that kept the happy Guests dancing and singing Karaoke.
Guests are invited from care homes and a few Guest’s parent’s homes from throughout the Saddleback Valley. Due to room capacity requirements, admission is by invitation only. The Christmas event is one of two such annual parties sponsored by the Elks Lodge for the developmentally challenged. A summer Sock Hop is the second. Both are funded by the Elks Lodge Bingo Charities Committee. Elks Exalted Ruler Harvey Boelts said of the Christmas Party, “I wish the Elks Lodge bingo players of the Saddleback Valley could be here to witness this grand party. It would surely warm their hearts to see so much happiness generated because of their support of our charities through their participation in the Elks Lodge bingo events.” 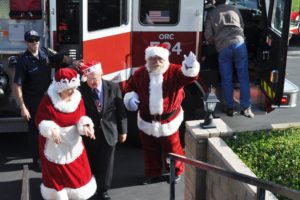