Mark’s community project was to pick up trash, and clean and re-stripe the parking lot for the New Life Thrift Store in Coachella. This thrift store raises funds for the Coachella Valley Rescue Mission (CVRM).  The CVRM provides services to area homeless. Mark raised the funds to accomplish the project, made the stencils, and recruited the work crew.  Mark and his crew spent over 119 hours completing the task.  Mark finished off his project by collecting over 800 articles of clothing for the homeless. 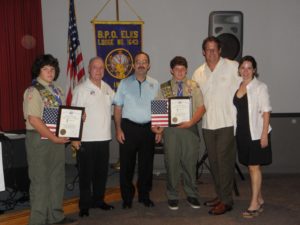 John’s community project was to restore and beautify a 40 foot storage trailer belonging to the Coachella Valley Mounted Rangers located at the north end of Monroe Avenue in Indio.  The Mounted Rangers assist area law enforcement agencies with search and rescue functions, rescue abused horses, and conduct educational programs for area children.  This trailer can be seen from Monroe Avenue.  John raised money to purchase supplies and organized a team to clean the area of debris.  They prepped the trailer by removing rust, applying a primer coat, and spray painting the trailer red.  John then applied the finishing touches by painting an American Flag on the side of the trailer. John and his crew spent over 144 hours accomplishing his project.