At their regular meeting, the Garden Grove Elks, led by Exalted Ruler Bill O’Hearn, honored their last surviving charter member, LaVerne Reafsnyder with the honor of “Elk of the Month”. This award is given to a member who has been an outstanding contributor of time and energy to the Lodge objectives, charities and functions as well as being an outstanding citizen.

LaVerne has been a member of the Elks for 65 years, beginning in the Santa Ana Lodge in 1949. He transferred to the Garden Grove Lodge as a charter member in 1955. He sponsored many people into the Elks during his 65 years of tenure as an Elk, including two of his three daughters, Letha and Margaret. Now at the age of 91, LaVerne is proud of being a charter member of Lodge number 1952, one of Elkdom’s most notable Lodges.

LaVerne has an impressive list of accomplishments in and outside of Elkdom as follows;

LaVerne served in the “Army Air Corps” (later known as the US Air Force), as a bombardier in the Western Pacific during WWII he completed 21 missions. He met his wife Jane after the war and was married to her in 1945.

Those are but a few of LaVerne’s accomplishments.

The Garden Grove Elks love, honor and respect him. 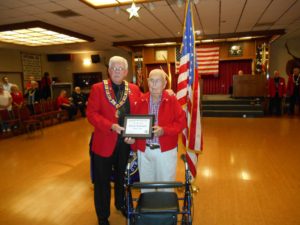