Fullerton Elks Lodge No. 1993, Irene Imhof, Chairman of the Special Child of the Month program, introduced, 11-year-old Hudson, his mother Lisa and his surrogate 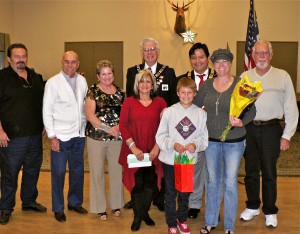 grandparents to the Lodge Officers and Elk members. Wish gifts were presented to Hudson that included a gift certificate for a TV and a bouquet of flowers to Lisa, Hudson’s mother.

Hudson was diagnosed at birth with Proximal Femoral Focal Deficiency. Because of this disease his left leg is currently 4 1/2 inches shorter than his right. Without treatment and surgery the discrepancy could be as drastic as 6 1/2 inches when he is full-grown.

Hudson has had two failed surgeries, the first one when he was only a year old. After some growth, the bone ended up breaking and had to be put in a cast to heal the break. He wore a cast from his waist down to his ankles for eight weeks.

Lisa was not happy with Hudson’s recovery and decided to look for a Doctor at Children’s Hospital in Los Angeles to see if this surgery could be done again with a better chance of success. The leg had grown 2 1/2 inches in 29 days, but unfortunately the bone broke again. Hudson was then rushed into surgery on July 16, 2010, to see if they could repair his leg and stimulate growth. Once again all the new growth was lost and they had to put a titanium plate and 9 screws to hold his leg together. The plate was put in December 2010. Today, Hudson is still wearing this plate in his leg.

Hudson is now receiving physical therapy twice a week to gain strength and flexibility in his leg. His therapist has recommended a doctor in Florida that has been very successful in this area. Finally, after 3 months of waiting for an appointment to see him, Hudson and his parents flew to West Palm Beach, Florida for a consultation. They were both pleased with the outcome of their visit and felt very positive about the doctor’s credentials as a surgeon. The first surgery Hudson must undergo is on his left hip; it is a specialized type of surgery that is done prior to limb lengthening surgery. They will remove his titanium plate and assess his knee to see whether knee ligament surgery needs to be done. This will mean a stay in Florida for rehabilitation and physical therapy for about three weeks or so.

Lisa, says, “After this surgery is performed we will then be able to schedule his first lengthening surgery 6-8 months later. Hudson may be a candidate for an implantable limb lengthening. This will be determined after all his tests and results are assessed. If possible, they will insert an implantable lengthening nail in order to lengthen his left femur. The hope is to gain 5 centimeters with this surgery”. Hudson has a long road of surgeries ahead of him but remains a positive and happy young man.

The Elks are accepting any donations to help defray some of the family’s costs by simply sending a check or money order on behalf of Hudson Townsend. For further information call (714) 870-1993. Irene Imhof, Special Child Chairman.