Nicholas Payne says, “Scouting and ROTC has helped him to understand how to keep focused on a goal and to achieve it.” His Eagle Scout project was building a work table with shelving for We Care Foundation, in Los Alamitos, CA. He planned every single aspect of his project from drawing up the plans, site preparation, raising funds, rounding up the volunteers, purchasing the materials, assembly, safety, food, clean up and transportation of the finished product to the beneficiary.

Nicholas has great respect for those who have or are serving in the military. He knew that the service was something he wanted to do. He graduated from high school this year and on August 26th he proudly reports for basic training for the U.S. Army Infantry. He is interested in the medical field and hopes to become an Infantry and a Combat Medic. He will keep an open mind, however, because he has not entirely ruled out law enforcement. 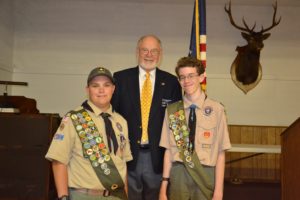 Matthew Edgar has been in Scouting since 2002 when he became a Tiger Cub Scout. In 2008, he bridged to Boy Scout in Troop 440. Currently, he is preparing for his Eagle Scout project which is the refurbishment of the horseshoe court at the Buena Park Elks Lodge No. 2046. To prepare for his project he is raising funds, recruiting help, planning the details of the construction day, including coordinating donations of materials and supplies, getting the supplies to the job site and assuring he has enough help to make the project a success.

Becoming an Eagle Scout means that he has earned at least 21 merit badges (he has 26) and demonstrates Scout Spirit through the Boy Scout Oath and Law, service to others and leadership. He is also a member of the Order of the Arrow an honor society within scouting and attended the June 2013 National Youth Leadership Training Conference. He plans to continue in scouting after he earns his Eagle rank and seek additional leadership opportunities as well as earn Eagle Palms merit badges earned beyond those required for the Eagle Scout rank. Matthew will be a junior at Pacific Coast High School this fall and when he graduates plans to attain a degree in Meteorology and Climate Science.