The first speaker, Archie was very emotional about his buddies he lost at Pearl Harbor and asked “why not me”. On the morning of December 7, 1941, he crossed the gangplank from the USS Vestal to the USS Arizona when the bombs began to fall. The force of a bomb hitting the Arizona threw him 60 ft over the Vestal and into the water. The heat of the explosion scarred one side of his face to a permanent reddening, knocked out two teeth, and stunned him. He stressed that he isn’t a hero but by the grace of God he wasn’t killed. He climbed out the water onto the Captain’s skiff and proceeded to transport those on the skiff plus picked up others on the way to the dock to unload the soldiers. As they ran along the dock to land, all were shot at and killed by a passing Japanese plane.

The second speaker, Richard told us of his experience on the night of December 5th, 1941,when his unit returned from escorting a Marine Fighter Squadron to Wake Island. On December 7th he was sleeping in his barracks when the attack began. He and his mates were held inside the barracks until that horrible attack was ending. His unit’s hangar, Hangar 6, took a direct hit from the first bomb of the war. He and others spent days working around the clock to get their unit up and running after the devastation. 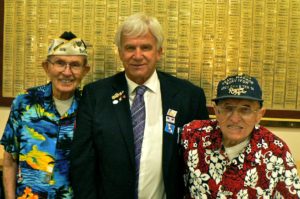 Both speakers were well received as one could see many of the audience wiping away their tears. After the event an extended line went to hug them and thank them for a job well done and for their service to our Country. 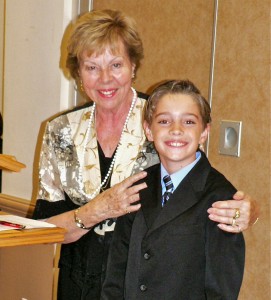 Nancy Flaherty, Americanism Chairman, presented $100 and a nice certificate for the winner of the State Contest Winner (What Does the National Anthem Means to Me) 5th-6th Grade – Jackson Lambros, which he read to the audience with great applause.