Mrs. Camarena is the widow of Enrique S. “Kiki” Camarena, for whom the BPO Elks “Enrique S. Camarena Award” is named. This award is given by Lodges, Districts, State Associations, and at the National B.P.O.E. level.

The award details are online at www.chea-elks.org/dev/DACamerenaCriteria.pdf. Here is a partial quote: “He was an 11-year veteran agent of the DEA who was kidnapped, brutally tortured and then murdered in Mexico in 1985. Prior to serving with the DEA, Agent Camarena was a firefighter, a criminal investigator and a narcotics officer. He was a loving husband and a father of three children. His death has inspired millions of Americans to lead a drug-free life and the Elks to celebrate his commitment to this effort with an annual award.” 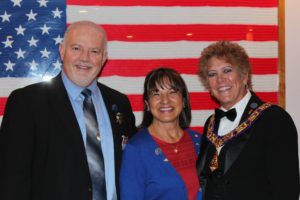