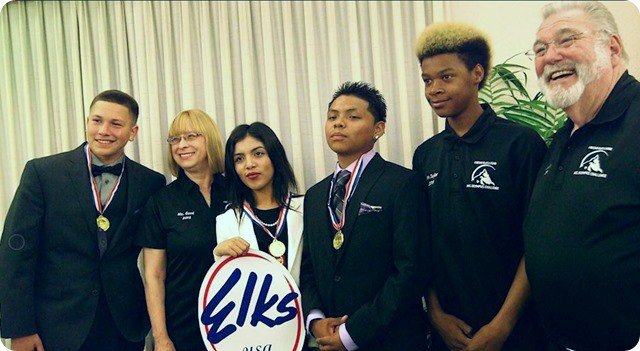 As the school year comes to a close, so has the 2016 Fresno Elks Lodge No. 439’s “Mt. Olympus Challenge”.  Expelled students from throughout Fresno County competed with one another to convince community judges and Elk members to support a charity idea that they created to help meet a need in their home community.

Nicholas proposed the winning idea for a charity he titled “No Place To Play”. His project would repair broken playground equipment at his apartment complex.  The 1st runner up, Yenices, proposed an idea for her charity titled “We Are Not For Sale” that would help victims of human trafficking. The 2nd runner up, Fernando, proposed an idea for his charity titled “Giving a Helping Hand” to provide services to our Veterans. Finalist Ronald proposed a charity to help the homeless get off the streets titled “A Place To Call Home.”

The students, who were expelled from their home schools, received twelve weeks of hands-on coaching and mentoring from lodge members as they created their charities, prepared PowerPoint presentations and helped plan and execute the first fundraiser for Nicholas’ project.

The program is funded through a $10,000 Impact Grant from the Elks National Foundation.  Fresno Elks Lodge members Susan Good and Jack Geiger served as Project Managers for the grant.