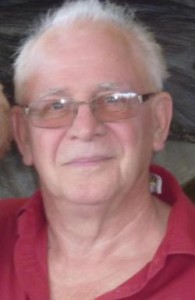 (Obituary compliments of Habing Family Funeral Home, Gilroy, CA)
John passed away at home surrounded by his wife and family. He fought a short but valiant battle with cancer.

John was born in New York City (Manhattan) NY and raised in Pennsylvania and New Jersey.

He entered the United States Army in 1959 serving in Berlin, Germany until 1963 and awarded the Good Conduct Medal.

In 1970, John moved his family to San Jose and eventually they made their way to Gilroy where John remained until his passing. He earned a Degree at Gavilan College and accepted an accountant position as controller with Pacific Underground Construction where he retired. John worked part time at Rapazzini Winery where his humor and joyous personality won over many tourists and customers. John was known for his humor, his abundant energy and deep sense of duty, love for his family, his community and his country.

After retirement, John and Phyllis traveled in their RV many times across the USA, Canada and Mexico. With John’s fun-loving personality, they made many friends all of whom are still close today.