With five of our six lodge champions participating in the California Semi-State Championships in early February at Foothill Jr. High School in Carmichael the anticipation was very high for promising results from our kids!

On three occasions in the past twenty-six years, Walnut Creek Lodge No. 1811 has had two competitors together win the California-Hawaii state finals for the right to participate in the West Region finals in Las Vegas, Nevada. This is indeed a rarity in the forty-two years of California Hoop Shoot competitions.

During these past twenty-six years, Walnut Creek No. 1811 has had seven contestants participate in the National finals. The number could very well grow again in 2014!

The several hundred people in attendance this year saw an unprecedented result from the Walnut Creek sharp shooters!

Beginning with the girl and boy 8/9 year old group, LOGAN DUNN, age 9 from Danville, made a whopping 21 out of 25 free throw attempts to tie with her Northern Californian counterpart. Logan went to the foul stripe and calmly knocked down her five tie breaker shots without a miss and was declared the California champion! Logan was our lodge champion in December with a score of 12 made shots out of 25 attempts. This shows you what a child can accomplish with determination and tons of practice!

RAHUL SRINI, boy age 9 from San Ramon, competed extremely well by sinking 21 of his twenty-five shot attempts. A tie breaker competition with another NorCal District champ was conducted and turned out to be the most exciting shoot off of the day. Both boys sank 5 of 5 attempts and continued to a second round of five shot attempts. Rahul made four of five to again tie with his worthy adversary. On the third round of five shots, our lodge champ swished all five shots and beat his rival by one shot and took the Northern California crown! The Southern California champ won the state title by making a very strong 23 of 25 shots.

DAYLEE DUNN, age 11 also from San Ramon, but not related to Logan, was outstanding and dominated the girl 10111 group with a fine score of 22×25 shots made (88) and easily won the California state championship crown! Keep an eye on this phenomenal talent in future years!

The boy 10/11 Walnut Creek champ, CHASE BENNETT started out well, but hit a rough patch of near misses, finishing out of the top two finalists. Chase promises to be another future star with continued growth and development! (He is the son of Saint Mary’s College coach, Randy and Darlene Bennett).

Walnut Creek’s final competitor was SHINGO O’FLAHERTY, age 13. With tremendous consistency, Shingo drew the attention of everyone in the gym. Rhythmically, Shingo made shot after shot. Shooting first and after a couple of close misses found himself with a final score of 22 of 25 shots made.

Now the pressure was on the other capable opponents to match or beat Shingo’s effort. They could not! However, the Southern California champion tied Shingo. Five straight perfect tie breaker free throws later, SHINGO was declared the State champion!

Our three fine champions are now practicing diligently for the Las Vegas contest being conducted on Saturday, February 22nd . 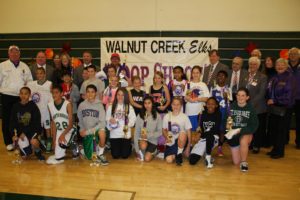