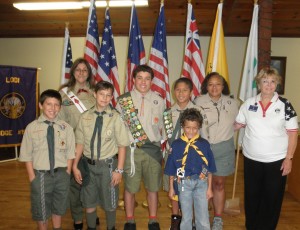 On Sunday, June 15th, Lodi Elks Lodge held their annual Flag Day Ceremony. Carolyn Greeson, Exalted Ruler, along with fellow officers, told of the historical relevance of each flag as the Scouts of Troop #199 paraded the flags in front of the audience. Afterwards there was a continental breakfast for the Boy Scouts to enjoy. Later that morning a Gin Fizz Charity brunch was held for Elk member participants and their guests. The event raised $275 towards their Major Project, which helps children with disabilities. John Rochon was the Elk chairman of that event. He was assisted by many Elk volunteers. Local businesses and Elk members donated raffle items towards the fund raising efforts.
Earlier during the week the Elks held a visitation dinner for Elk Dignitaries. The volunteer food servers came from Venture Crew 199 and Scout Troop 199. They also helped clean-up afterwards, for which they received $117 in tips that helped them buy their uniform shirts.