Westchester, CA- Elks Lodge #2050 donated $2500 to the Westchester Babe Ruth League to re-seed their Ivan Miller Field.  This is the second year the Elks have completed the project which is spearheaded by members Chris Lynch (also with the Westchester Babe Ruth League) and member Larry Diver.  The team celebrated 60 years of playing on the field in 2016 and were the 2015 (13-15 year olds) World Series Babe Ruth Champions.   Funds were made possible from a Beacon Grant through the Elks National Foundation.

In other news, the Lodge donated $200 to help sponsor a youth in the Junior Cadet and/or Cadet program in the LAPD Pacific Division Cadet Program.  The Ladies of Westchester Elks also donated $200 towards the program.  LAPD Pacific Division Junior Cadets range in age from 9 -13 years old and Cadets are 14 – 21 years old.  Many come from challenging backgrounds but with the support and direction of the program, go on to college, military academies, and/or the police academy.  $400 assures one youth a full year of participation and covers costs such as uniforms, field trips, supplies and much more.

The Ladies of Westchester Elks also donated $200 to the Bob Hope USO at Los Angeles Airport which provides many services and needs to create a comfortable and welcoming “safe haven” for troops and their families traveling through LAX at no charge.  It is one of the finest centers in the worlds.

Pictured are Elks members with the Babe Ruth team and coaches and also with just Elks Members and Babe Ruth President Chris Lynch whom is also an Elks Member. 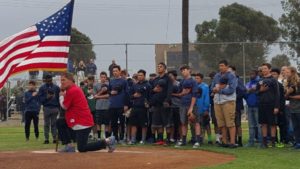 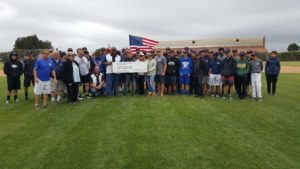 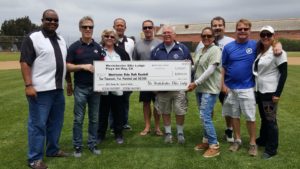