Frank Almazan, Southeast District Vice President, made his official visitation to the Lake Elsinore/Wildomar Elks Lodge No. 2591 on Tuesday, June 16.  He was accompanied by Janice, his First Lady as well as District Leaders Michael Tharp and Glenda, his First Lady and Jimmie Spezia and Bobbie, his First Lady.

Ginny Mulhern, Lodge Exalted Ruler, welcomed Frank and members from the eleven lodges in the district.  After dinner, Frank addressed those present and stated that his motto for his term of office was “Volunteerism is the heart of Elkdom.”  He has designed pins and certificates for volunteerism.  He stressed how important it was to involve both new and current lodge members to volunteer for different positions and offices thus contributing to the retention of members and lodge success. He then gave a Special Certificate and pin to Carole Warren, Lodge Elks Ladies President, for all the activities her group has contributed to the lodge with events such as Christmas Tree Lane, The Fashion Show, Fifth Sundays Buffets, Fathers’ Day Brunch, etc.

Frank also gave Ginny a Special Certificate for the lodge’s total contribution of $15,111 to the California-Hawaii Elks Major Project which provides treatment for children with disabilities. This amount was turned at the last CHEA Convention.

The meeting was then turned over to raise funds for CHEMPI with 14 members donating $100 checks for the Century Club.  An auction was also held of donated items and a total of $2258 was raised.

The meeting was then closed with all going to the social quarters for sociability. 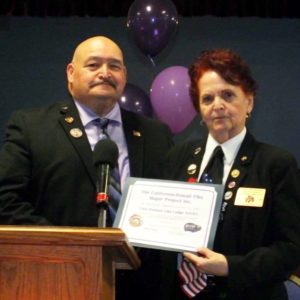 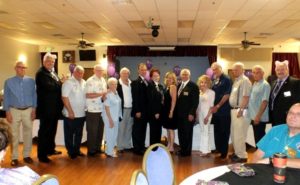