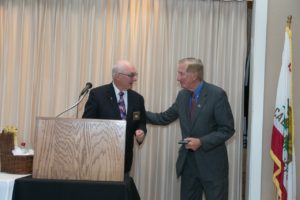 Rick Ringler, honored in 1978 as the Pacific Grove Fireman of the Year, thanked more than 100 first responders and Elks members at the annual Public Safety Appreciation Night at the Monterey Elks Lodge on Wednesday, June 7.

“Our public safety workers put their lives on the line for us on a daily basis,” Ringler said. “Thank you.  In this very small way, we wish to show you our appreciation by hosting this night to honor you, the men and women of Monterey County who help keep us safe.  Truly, thank you for being here for our community.”

Ringler served as a volunteer fireman at Pacific Grove Fire Department from 1977 until he retired as a lieutenant in 1990.  He was an educator at Monterey Peninsula Unified School District from 1970 to 2007, and now serves as Exalted Ruler of the 800+ member Monterey Elks Lodge #1285.

The Elks’ Award medal was awarded to District Attorney Dean Flippo, and Elks’ certificates of appreciation went to each award winner.

Directors of the Monterey County Peace Officers Association (MCPOA) were sworn in and awards were presented.  Ringler welcomed guests to the event, which included a roast beef carving station prepared by the Elk’s caterer, Coastal Cuisine.  Caroll Mendoza led the Pledge of Allegiance, and invocation was given by the Elks Chaplain, Lori Taylor.  Gaspar Cardinale served as event chairman, assisted by Leslie Field.

Raffle drawings during the evening provided more than $900 to Elks’ major charity projects and to Rancho Cielo, a nonprofit, comprehensive learning and social services center for underserved and disconnected youth in Monterey County. The event closed with installation of MCPOA Board of Directors for 2017-18.