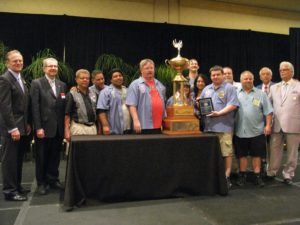 The Bud Tari Perpetual Trophy is awarded to the most underappreciated member of the ritual team; “the candidate” as was stated before. Bud Tari was the first Exalted Ruler of the Livermore-Pleasanton Lodge No. 2117. The trophy was obtained by Trill Torrilhon, CHEA Historian. It served as the winning cup for the California Ritual Competition from 1925 to 1930. The most impressive candidate of the final four contest is Judy Tucker from the Carmichael Lodge No. 2103.

The preliminary contest was held on Thursday, May 15, 2014 with seventeen teams that won their district contests and performed in the Grillo and Moore Divisions. Each of the two top scoring teams of each division moved up to the finals that were held on Friday, May 16, 2014 to see who would represent California at the Grand Lodge Contest to be held in New Orleans in July of this year. The preliminary contest also determines the All State Officers, Candidate, and Coach for each division. And so the results: