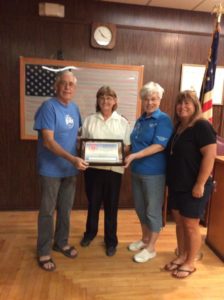 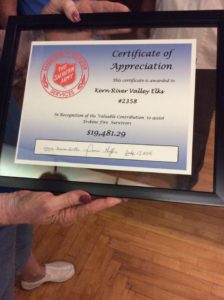 The Salvation Army honored Kern River Valley Elks Lodge with a plaque for the money and hundreds of volunteer hours we put in one year ago during the devastating Erskine Creek Fire. Thanks to all who were here for three weeks!

One year ago Kern River Valley Lodge #2358 was fully entrenched in assisting victims of the largest wildland fire in Kern County, CA history.  Just under 300 homes were lost, with as many families affected.  Two lost their lives.  Over 48,000 acres were burned.  The following was my report to our District Leaders who were at Grand Lodge at the time.

July 10, 2016:  We, as Volunteers, have been at our Lodge every day for many hours a day, since June 24th.  One of the first phone calls I received was from PGER Tom Brazier on Saturday the 25th telling me to call him if he could help in any way.

We had one member who lost her home, Rita Wayne.  Fortunately, she and Mel are now at Mel’s home in Wofford Heights – she was fully insured.  We took care of her immediate needs on Sunday the 25th and then she Volunteered for several days.  She is an amazing woman.

We had several families who were without power for at least 4 days including the entire Sunderland Compound, Bud and Pat Poole, Patty and Mike Elliott, and others.  We immediately opened our RV Park for free to anyone who needed it – members and victims alike.

We all suffered for days with no communication abilities – cell phones, spotty internet, power, etc., but we were spending our time at the Lodge with a land line and air conditioners, so we were fine.  ER Jerry Oreskovich told us to do what needed to be done before he left for Grand Lodge and specifically told our kitchen staff to use their own judgment regarding feeding Volunteers and Victims.  Our amazing kitchen – run by Lauralee Dominicak and Theo Zook – together with Pat and Bud Poole were at the Lodge every day making sure we had nutritious meals and reminding us to stay hydrated.  We received many donations to our kitchen (cash and goods) so the Lodge was out very little money.

The upside of this terrible fire is that, within our Lodge, hearts were healed and friendships were renewed.

We partnered immediately with the American Red Cross and The Salvation Army. We became the major collection/distribution point on the North side of the Lake.  Our Lodge Room, Pool Room and 30,000 sq ft Park were filled to capacity with “stuff.”

We nurtured, counseled and clothed over 1,200 (we probably missed a few names) people who came through our doors.  We kept records.  On Monday of this week, we began moving everything (except sundries and food) to our Park for storage and distribution.  You see, our Leading Knight Jack Sparks and Lecturing Knight Shirley Allen are being married today, and made arrangements months ago to use the Lodge, and we wanted to make sure they would have their wedding in a “completely put back together” Lodge Room and Dining Room.  We did it!

The cash donations began pouring in the first day.  The monies were safely held in our Discretionary Account as we became a “holding company” for the burnt out victims of this devastating fire.  It grew to proportions that I, as Chairman, KNEW we didn’t have the resources to handle.  We bought tents for victims who were sleeping on the ground at River Nook Campground.  We bought insulin for a gentleman who needed it immediately.  We purchased heart medicine for a man who had just had heart surgery and there was a snafu with his insurance company.  We put gas in cars.

The amount of money became overwhelming.  We received a check for $5,000 from Ridgecrest Lodge; a check for $1,500 from Bakersfield Lodge; Mojave Lodge brought donations of needed items, spent the day Volunteering – with Ted Hodgkinson in the lead – and handed us $200 in cash from their members.

The Salvation Army was giving out vouchers to victims, and were using local businesses for redemption.  A win-win situation.  In my humble opinion, it was time to shift our donations to the Salvation Army with the stipulation that it remain local as all the donors requested.  I spoke with DDGER Vicki Zellner and DL Dominic Rotell regarding this.  Although, I was told the Board of Trustees were not in charge of this money and, although one officer and one Trustee didn’t think we should “let go” of the money,  in my heart I knew we were not equipped to decide who should get it and it had become frighteningly bigger than I EVER anticipated.  I asked the Board of Trustees in an emergency session to help me decide.  The consensus was the same – give it to the LOCAL Salvation Army.  I kept a comprehensive list of Cash donations, Volunteer hours and Victims names with burnt out addresses.  I will be writing thank you notes beginning next week.

On Friday, we presented the check for $19,444.03 to Salvation Army Envoy Donna Griffin,  East Kern County Ministries Coordinator and Candace Maynard, Erskine Fire Disaster Coordinator for use in the Kern River Valley.  Because the local business know what the Elks did for the Salvation Army, they immediately increased their credit limit for vouchers, so it is already helping fire survivors.

PER Craig Sunderland donated an empty building and vacant lot in Lake Isabella to the Salvation Army rent-free for two months – at which time they will re-visit.  The NEW Salvation Army headquarters should be in place within that time frame.  There are 6 Sea Trains now in place on that property and the Kern River Valley Lodge will be moving EVERYTHING to that location starting on Monday.  We are in the process of boxing and labeling to make it happen.

The Red Cross visited our location MANY times.  They told me they have never seen a more organized and dignified method of distribution to disaster victims.  All 3 local television stations were here.

We did a good job for our community.  We are tired but rewarded with our efforts.  This was a GIGANTIC team effort by dozens of Elks and community members.